the Economist called it “the West’s biggest economic policy error,” undermining economic growth and the public’s faith in fairness and capitalism.

The mistake the economist is referring to is the misguided policy of promoting homeownership that has created the most serious economic failure in the developed world.

At the origin of this failure is the application of town planning rules which have restricted the supply of housing, especially near large cities. This has led to a surge in rents and housing prices in cities, preventing workers from moving to areas with the most abundant and productive jobs, and ultimately slowing GDP growth.

The real costs to the economy of restricting supply in major US cities have been identified in an analysis by economists Chang-Tai Hsieh and Enrico Moretti in 2015. They found that the lack of affordable housing in cities like New York, San Francisco and San Jose (home of Silicon Valley) costs the US economy an estimated $ 1.6 trillion a year in lost wages. and productivity.

The effect has also been studied in New Zealand by Pierre Nunn whose 2019 research found that housing supply constraints caused by restrictive zoning rules in our large cities played a significant role in driving up house prices. It has also had significant economic impacts by pushing labor away from high productivity regions of New Zealand, particularly Auckland and Wellington, and increasing the net migration of New Zealanders to Australia. Nunns estimated that the total economic gains from reducing housing supply constraints in New Zealand amounted to $ 21 billion per year, or 7.7% of GDP.

House prices have not always increased at the rate that we have seen in recent decades. In fact, prices in most industrial economies remained constant from the 19th to the mid-20th century (Mound, 2017).

According to Fessler and Schürz, it was not until the 20th century that owning a single-family home became a goal and a sign of integration into the rising middle class. After World War II, property also became a major vehicle for wealth accumulation, driven by rising land prices. They argue that land prices have risen due to deliberate policies to restrict land use and incentives to encourage people to funnel more money into the mortgage market.

The increasingly exclusive club of owners means that the only way most people can enter the market is to gain parental support or take on heavy debt. It has also made the housing market volatile, with many financial crises, including the 2007 GFC, emanating from real estate bubbles.

As real wages stagnate and house prices continue to rise, the gap between typically older homeowners and younger people struggling to enter the market has been widened. It may even spur political change with The Economist’s report claiming that “the view of young people that housing is out of reach – unless you have wealthy parents – helps explain their drift towards” millennial socialism “.”

Rising household debt can be positive in the short term, boosting economic growth and jobs, according to an IMF study. However, within three to five years, these effects are reversed as heavily indebted households are forced to curb their spending. Economic growth is slower than it would otherwise be and the likelihood of a financial crisis increases.

Fessler and Schürz argue that, combined with the challenges of an aging population and climate change, the dream of the single-family home has become a major problem. And it is an issue that policymakers are afraid to face head on even if it is harmful to society and the economy.

It is well established that New Zealand now has one of the most expensive housing markets relative to income in the OECD, Auckland being the fourth least affordable city in the world (according to Demography). While lax monetary policy has led to an explosion in house prices globally, Bloomberg describes New Zealand as “a poster for the boom”. 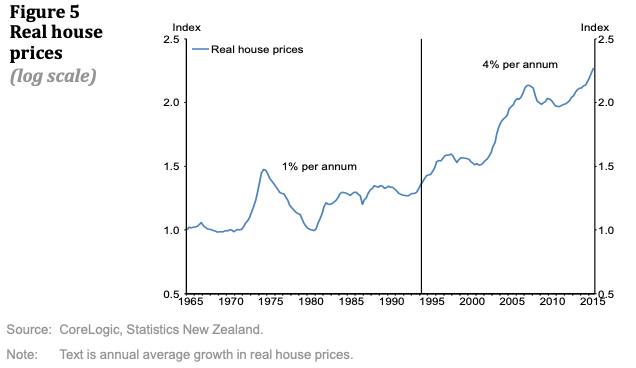 The aging of the population has also seen the size of New Zealand households decline, further exacerbating the housing shortage. According to Stats NZ in 1951, the average household size was 3.7 and in 1981 it was 3.0. Today, that figure is only 2.7. Consents for new homes are on the rise with the number of homes granted in 2020 highest in 46 years, but they are still below 1973 levels on a per capita basis.

As in other Western countries, politicians on both sides of the political divide have supported house prices. CoreLogic’s research chief Nick Goodall said there were consistent messages from the current Labor government on the need to protect real estate. This is not surprising since the majority of voters are homeowners, which means that there is currently little political will to tackle the problem.

However, despite being politically unpleasant, the tide can change. Governments in the Western world are facing growing anger over the housing shortage and soaring inequalities in housing wealth. At some point, they will have no choice but to tackle the housing affordability crisis that almost no homeowner wants to solve.

* Alison Brook is at the Knowledge Exchange Hub at Massey University campus in Albany, Auckland. She is on the GDPLive team. This article is a GDPLive blog post, and is here with permission. New Zealand’s GDPLive resource is also available here.